Productivity was one of the key business buzzwords in the chancellor’s recent budget speech, and there are few more important things in the modern workplace that having a great set of productive staff. So what exactly makes employees tick? We asked 1,000 people what motivates them to work right at the top of their game. There were some surprising (and some not so surprising) results which we have compiled into our ultimate guide to productivity in the workplace.

When it comes to boosting employee productivity one thing came out on top: Money. A pay rise was found to be the biggest motivating factor with 49% of respondents saying this would boost their output. A further 36% of workers said bonus incentives would increase productivity – the second most popular response.

Also of note is the fact women were found to be ever so slightly more mercantile than men, with over 50% of female respondents citing a pay rise as a key motivating factor. Only around 48% of males said this would improve their productivity.

Doing it for free

Of course, for many small businesses margins are tight and pay rises across the board simply aren’t feasible. So how can bosses get more from their staff without dangling that bag of money before their eyes? Well our research found three particularly popular cost-free ways to up employee productivity:

This ‘holy trinity’ of cost-free factors is music to the ears of SME owners nationwide, who can be reassured that it’s not all about the money to get many people working at their best.

What about the workplace?

While flexible hours were found to be key to boosting output, what about other important workplace-specific factors?

We discovered a quiet office was much more preferable to a loud or ‘buzzing’ environment; a significant finding in this age of open-plan offices and increased collaboration. Just over 10% of respondents also said they were more productive when flexible working arrangements also extended to where they could work. Interestingly though, this option was only half as popular as flexible working hours.

What not to do

Our research also turned up a few options that didn’t prove to be popular amongst our selection of UK workers. So, if you’re looking to improve your employee productivity, the following might be methods you’re best to avoid:

So what can you do?

So, while businesses with plenty of available capital can inspire employees with the promise of financial reward, there’s an awful lot more an employer can do to increase worker productivity.

A lot of this revolves around the workplace itself: Whether it be letting employees work when they want, where they want, or even trying to reduce stress to ensure employees aren’t up all night worrying about work. Of course, a congratulatory word also goes a long way.

The common theme amongst these supposedly ‘cost-free’ solutions is what we’d deem as a focus on employee ‘wellness’. As well as boosting output things such as flexible working, or simply saying well done, can potentially make everyone feel more valued.

This really does extend beyond productivity and can bring employers further benefits. A happy employee is often more productive, but key issues such as staff retention rates can also be improved when you have a loyal and engaged workforce. 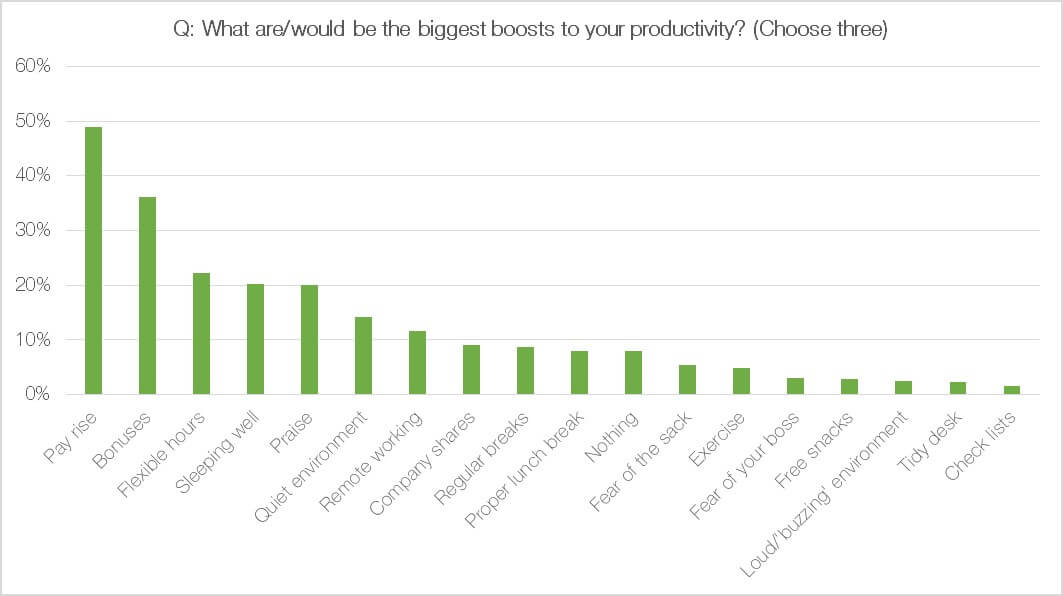