Here at Office Genie, we like to think we leave no stone unturned when it comes to the office space world. In this case we’ve been getting to the crux of something that can brings misery to the lives of millions of workers: their colleagues. While many people enjoy a happy office life with charming co-workers, many evidently do not. So, what is it that really gets on people’s the nerves?

Nothing creates a calming working atmosphere quite like the sound of a phone endlessly ringing, with no-one taking it upon themselves to pick it up – at least this is the case for 17.7% of the 1000 workers we surveyed.

This isn’t the only way phones bring consternation into the office either: 9.7% of responded said colleagues talking loudly on the phone as a particular irritant. A further 9% also claimed people who use their personal mobiles too often get on thesir nerves.

4: Who fancies a gossip?

Coming in at number four on our list, office gossip was cited as an irritant by almost 20% of the workers we surveyed (of course you might argue this suggests a whopping 80% don’t mind gossiping).

Of course at Office Genie we would never advocate idle chit chat and rumour mongering, so next time you shuffle off to the water cooler (if this still happens in a modern office) think of that poor 20%.

Yes, 20.8% of people we surveyed cited tardiness as one of their workplace pet hates. And very right too! Few things are more frustrating than seeing colleagues turn up 10 minutes late when you’re already been slaving away for what feels like an age.

Of course, with flexi-time increasingly commonplace in the British workplace, there really is no excuse for missing out – we’d expect all tardy workers to be making it up at the end of the day, naturally!

Coming in at number two on our list of office pet peeves, smelly food is something that really gets on the nerves of our respondents. Almost one quarter of the workers we surveyed cited this as a major faux pas.

So, if you’re planning anything more controversial than a ham and cheese sandwich, make sure you consider those around you. And their poor unfortunate nostrils.

1.  The really awkward one

If there’s one thing more offensive than a bad-smelling lunch, it’s a bad-smelling colleague. Coming in well ahead of the rest of the field, over one third of all respondents cited poor hygiene amongst co-workers as their biggest pet peeve.

Of course few issues are more difficult to bring up in the workplace, but thankfully there are a number of ways to deal with this: You could move desk; start working from home or simply, and perhaps most controversially, have a subtle and polite word. Who knows what the right answer is! 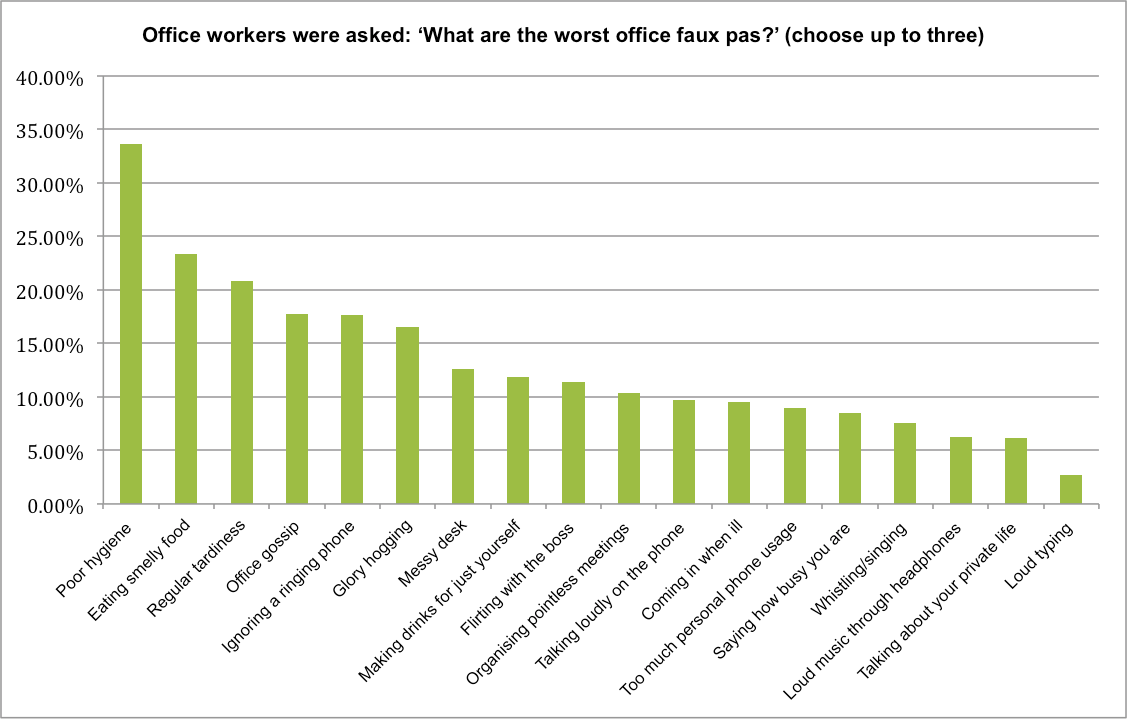