We recently looked into the New Year's resolutions employees are planning to bring to the workplace in 2017 and perhaps surprisingly, pay took a backseat. The top resolution for workers in the UK is improved work-life balance.

Our research revealed a more holistic approach to wellbeing, rather than merely financial, has been favoured by the public. Second to work-life balance was the desire to learn new skills in the workplace. This may be indicative of a wish to move roles: nearly a third of people (30%) stated they are looking for a new job in the new year.

Pay may play a part in this too because whilst it did not come out top, a pay rise is the third most popular resolution (12%). Yet in spite of the clear desire for a change, half (51%) of these job seekers do not think they will leave their current role.

Having healthier lunches (9%), being more organised (7%), and getting a promotion (6%) are also high up on the list of resolutions. Employees were least concerned about improving productivity levels (5%), working harder (3%) and making more friends in the workplace (1%). 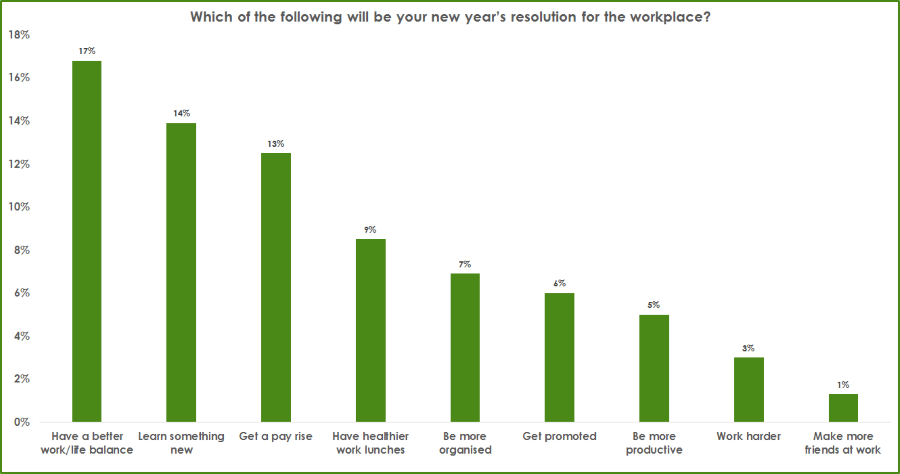 "The fact pay comes in third, behind work-life balance issues sends a clear message, many workers are simply being asked to do too much for too long.

"We’d urge business leaders, and indeed the government, to look at schemes such as the French 'right to disconnect' as a key way to show how legislation can directly enforce better work-life balances.

"Ultimately this should be good news for employers, who can look to policies to reinforce worker engagement - rather than just the payroll."