Hot desking - or how the Navy beat us to it 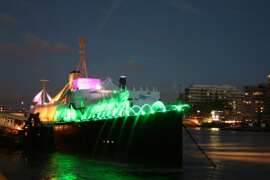 Hot desking is the exciting new business practice we're all talking about. Some of us have spare space and are looking to fill it with interesting, fun associates, while others need a working base away from the madness of a domestic home life. It's the brand new 21st century way of doing things.

Actually, we're not as modern as we may think – the idea has its origins in 13th century naval history. Back then, the Dutch were assigning themselves 'mattenhoot' or 'mates', as they became commonly known, with whom they would share a berth. One would be on duty while the other rested and kept the bunk warm. You see where I'm going with this?

Fast forward to the 16th century and the practice was taking shape on a global scale. 'Hot racking' enables a navy to save on berthing space by now having three or more sailors sharing the same bunk as they alternate shifts. The bunk has now become 'hot' partly because of the number of sailors using it and partly because many of them would not shower or even change uniforms between shifts!

Nowadays we would hope that while the practice continues, most notably in submarines where space is at a premium, the levels of personal hygiene have improved.

Now, at least one of our advertisers is sharing a bit of this naval heritage, but how times have changed. Where once hot bunking was forced upon the navy by ship and crew size now it provides an elegant solution to the problem of where and how to work in 21st century Britain.

For example, H.M.S.President, (pictured above) offers complete workstations where you can take your business to the next level with barely a weevil in sight. But maybe next time you fill your spacious, air-conditioned desk from Desk Space Genie you could spare a thought for the poor conscript who 'hot-desked' his way through life in times gone by.

One wonders if the residents of the President appreciate the irony of their position aboard the spectacular 1st World War corvette – and what the original sailors would make of her new role in the centre of the hot desking revolution.